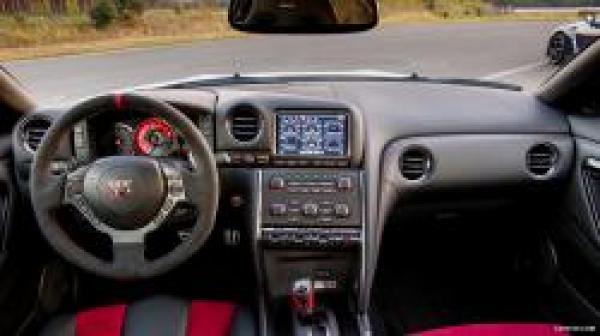 Nissan GT-R is a luxury sports car having 2 doors. It was first introduced by the company first in 2007 as a successor to the earlier Skyline GT-R. There have been several updates and improvements in this car over the years but one thing remains common and that is the philosophy of the company to produce powerful machines that are uncompromising in quality and performance. This car not only produces very high power but also provides great maneuverability.

Get luxury with power with 2015 Nissan GT-R
2015 Nissan GT-R has a base price of $149,990 with the price going up as you add features and go for its variants. The car is introduced in the category of coupe and has the capacity to seat 4 people. It is fitted with a powerful 3.6 liter V6 engine that gives a power of 545 HP and a torque of 463 lb-ft. you can get this beautiful car in 4 different trims that are labeled as Premium, Black Edition, Track Edition, and Nismo. You get an 11 speaker Bose audio system and a touch screen monitor with 5.5 inch LCD for its control as a standard feature in all the models of 2015 Nissan GT-R. Other standard features include keyless entry and ignition and 20 inch wheels. This is a dual clutch car with 6 speed manual transmission of gears.

Different variants with different features
2015 Nissan GT-R Black Edition is perhaps so called because of leather seats that are black Recaro. It features a red interior rim and rear wing made of carbon fiber. It is Nismo that is the top of the end model with some amazing features. It not only generates highest power of 600 HP but also generates torque of 481 lb-ft. This variant boasts of beautiful interior trimmings. 2015 Nissan GT-R claims itself to be one of the fastest cars in the world. But more impressive than its speed are the styling and the features of the car as it looks very beautiful in person. Though 2015 Nissan GT-R has not received any upgrades on its power, the company has made serious efforts to make the car look more stylish and elegant. This car is more suspension compliant and boasts of tweaked bushings and an anti roll bar at its rear. It is more livable and far more comfortable than its predecessor. Its modified braking system gives a better control to the driver while riding.